You are here: Home / Articles / Enlightenment and Liberation 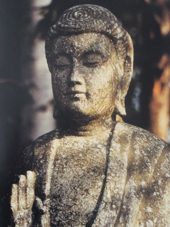 Until an aspirant has not reached a certain degree of enlightenment, his spiritual practice can not truly begin. He will not understand this work nor what is at stake for him. He will simply remain prisoner with fantastic ideas and imaginations on spirituality arising from his ordinary self and containing no truth. At best, his views will represent a set of intellectual speculation on the mystery of his being and his existence, probably elaborated with good intentions, but that would be unrelated to reality. Finally, it will not lead him any closer to the realisation of his true nature and to a correct understanding of the hidden meaning of life and death.

Although it is absolutely true that the seeker should at the beginning struggle to achieve enlightenment, it is also extremely important for him to understand that, paradoxically, he must not under any circumstances, practice his spiritual exercises with the conscious or unconscious desire to obtain results. He must be very careful not to look for – perhaps unconsciously –  unusual phenomena or wait constantly for results or project his imagination about what he thinks enlightenment can be. Such attitudes are certainly impediments to his efforts which will be continuously colored by the desires and fantasies of his ordinary self that interferes rather than depart. He must learn, especially at the beginning of his practice to focus on the subject of his meditation for the sake of doing it and for no other reason.
Generally, when meditating, the majority of people lose patience without their being aware of it and slackens the intensity of their concentration just at the very moment when they should more than ever be keeping it up, and plunging ever deeper into themselves. Thus, they are never able to pass beyond a certain threshold in their being. But this should not be misunderstood. It is not at all meant as an incitement to be brutal in one’s endeavours, using violence in such sacred work — sacred work which, on the contrary, demands a most delicate approach and subtle understanding. Although it is true that one’s effort must be very firm and sustained, at the same time — as was repeatedly said earlier — it has to be extremely gentle and tranquil, accompanied by the simultaneous surrendering of oneself.

Means to arrive at recognizing a subtle consciousness that one carry within oneself without knowing it.

The essential thing in meditation is to arrive at experiencing and recognizing with absolute certainty this sublime consciousness in oneself, this subtle, vast and luminous consciousness which each being unknowingly carries deep within him.
It is important to realize that there are various degrees of illumination, from a small change of state of being and consciousness, which can escape to the seeker at the beginning of its manifestation in him, until the highest and so rare experience in which he acknowledges, without doubt, the Ineffable he carries within himself.
Enlightenment may, after a more or less long practice of meditation, sometimes manifest itself very suddenly and at the most unexpected moment (all depends on the levels of being and awareness of the meditator), or slowly, in stages, as a subtle change of state of being and consciousness, accompanied by the beginning of an inner awakening which at first can remain misunderstood by the aspirant.
This change in his conscience and his being, when it is deepening, led him to experience the sensation of a vast Emptiness disconcerting that, at first, may give the wrong impression to be a total darkness in which he will be swallowed. However, as he later discovered, this emptiness is not the “nothingness” he believed to be early in its manifestation in him.
Only through a  regular practice of meditation – to which must be added various concentration exercises that he must, despite the refusal that he will meet in him, agree to perform in the movement of his active life — it is possible to go beyond himself and reach this other kind of consciousness which one usually ignores the existence of, an expanse of Immaculate Consciousness compared to which his customary consciousness, he took until then to be the only conceivable, can be compared to that of a mere insect or, at best, to that of a monkey!
If he has really succeeded to experience this Luminous Awareness – which until then remained in the shadows, hidden by the mists of his profane self – it will then happen in his being and in his life such a reversal that everything he regarded in the past as being so important and dear to him, and which monopolized his whole being and all his attention, will now be looked at from another perspective and will lose its grip on his psyche.
It is nevertheless necessary to specify that prior to access to such an achievement, it can happen to an aspirant to touch during his efforts to remain focused a foretaste of that other quality of consciousness, a foretaste which, if he is not wise enough, may make him believe that he has achieved the goal of his quest – which, incidentally, is for many seekers the origin of numerous illusions and the cause of going astray. Indeed, it is not because he was able to taste a small change of consciousness that elevated him that the aspirant can afford to take it for granted and settle on what he believed to have acquired.

This change in his consciousness, so vital to allow him to discover who he really is – ie to know his True Nature – can not occur before at least a certain degree of unification takes place between the mind, feelings and body, a trinity that ordinarily is pitifully dis-membered, each party living in the world of its own and, somehow, even ignoring the existence of the other two!
In order for this unification of the three constituents of his being can be achieved, it is precisely the mind of the seeker which must awaken from its customary torpor and start to become actively present – whereas, generally, it is only passively present -, because, it is only when the mind is awake enough and actively present that it can connect with the feeling. However, like most of his fellow creatures, the aspirant lives too much in his head, and therefore he is cut off from his feeling, while he has an imperative need of it to raise him and support the efforts that he must necessarily carry out on himself, if he hopes to be able one day to discover what lies buried in the depths of his being, his Buddha-Nature, which is in fact the Infinite in him.
It is only by reaching a certain level in the intensity of his concentration that he can hope to get rid of his customary individuality to be able to join in him an entirely different state of being and consciousness than the one he knows commonly. He will then suddenly be placed in front of the necessity to consent to what seemed to him to be a troubling loss of himself in order to merge with the Infinite, who calls him.
At this crucial moment, where the stakes are so significant for him, he may feel an inexplicable refusal to accept that diving in himself (a dive in what seemed to be a strange disturbing nothingness.  And even if he has managed to dominate this inner resistance, he will discover that he can not remain in this new state which, at first, is too fragile to maintain. Also, at every attempt to plunge in himself, he will not help but, despite of himself, rebound to the surface of his being where, to his sadness, he will find himself as – or almost so – he is ordinarily. The habit and some of his tendencies not yet transformed still weigh him down ; he will realize that he has not yet earned the right to remain in the sanctuary of his Celestial Monarch.

Enlightenment is not liberation

Indeed, for the vast majority of the seekers, enlightenment (provided they reach it) does just mean the beginning of this difficult journey towards their emancipation. In other words, enlightenment is only the beginning of a life of work and study, because the seeker must not forget where he started from: his tendencies not yet transformed as well as his sexual appetites and his other desires again and again will lift their hungry heads and harass him.
Even if a seeker decides to shut himself away from the world completely, he will find that, sooner or later, unless he is one of the rare exceptions, he will be forced out of his retreat, both to satisfy the exigencies of his various wants as well as by the necessity for him to put his spiritual work into practice in active life also.
If, after having known the luminous aspect of his being, an aspirant cannot raise in himself the strong and sincere wish to know the dark side of his nature as well — perhaps thinking that because of the lofty spiritual experiences he has had this is no longer important — then he will render his emancipation very uncertain, if not impracticable.
The discovery of the Sublime in oneself does not mean the immediate release from the bondage to one’s inferior nature. This divine light must not be misused solely in wanting to withdraw into the bliss of its celestial oasis.

If, without really understanding what it involves, a seeker remains as he is, then each time he tries to touch these higher states again, they will last for short periods only, and, without his realizing why, he will find himself continually flung back to the level that corresponds to his degree of evolution.

If he can muster in himself the inner courage needed to face patiently and suffer again and again the truth of what he is in himself, each time he can see himself as he is, a mysterious alchemy takes place in him, creating the right and probably only condition for his transformation.

Although he will sometimes discover very distasteful things about himself, he must be careful not to brood negatively on them, forgetting the light that is eternally shining there behind them and through which they were seen.

• The Role of Great Music  in Existence