You are here: Home / Books / The Supreme Quest 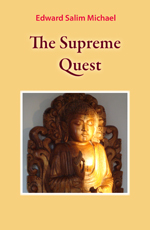 “Living beings are born and die continually. Sensations appear and disappear perpetually. Thoughts arise and recede unremittingly. Objects also take form and disintegrate. Desires wax and wane. Feelings are also changeable and fleeting. So, what remains that is permanent behind all these movements, behind all these creations, and behind all these incessant destructions around the human being and within him? Is it not a vital duty for him to seek to know the Immutable within himself, within which birth and death and all these perpetual changes have no place?”

To know this Immutable, it is necessary to look within oneself, to learn to meditate, to know an authentic moment of pure inner silence. It is a question, little by little, of trying the precious advice set out in this work, especially concerning control of the mind during meditation; it is the fruit of forty years of intensive meditation on the part of the author.

Edward Salim Michael emphasizes, in particular, the importance of habit because, he says, “Human beings cannot help being creatures of habit. It is necessary to establish consciously within them habits and tendencies that can help them in their spiritual practice.” And to strive against the routine, the seeker is invited to keep constantly alive within him/her burning questions concerning the Universe, consciousness, and the mystery of life and death.

The Experience of the Sublime

Any meditation practice essentially has the purpose of accomplishing the tearing away of the aspirant from himself—tearing him away from his ordinary individuality, as well as the habitual feeling that he has of himself, crystallized in him since a time far in the past and which, because of long conditioning, he believes to be his only identity—in order to discover, within his being, the other aspect of his double nature which habitually remains hidden from him because his interest and his attention are continually directed only towards the outside world.

Behind the thick screen of his corporeal form, behind his ordinary individuality, and behind his little world and everything he considers to be himself, there is, within the human being, another Universe of an extreme delicacy and an extreme ethereal transparency, an inner Universe ineffable and luminous, which is his True Nature, his Divine Nature.

To succeed in tearing himself away from the habitual feeling he has of himself and his ordinary individuality, he has to make a very particular effort, because it involves the effort to accept renouncing this individuality. However, habit is extremely strong and tenacious and, for the majority of seekers, achieving (even a partial) renunciation that constitutes, so to speak, a voluntary inner death, requires long years of meditation and tenacious struggles—provided that they are serious and motivated enough not to capitulate en route. They have to succeed in tearing away from themselves enough to create at least a certain degree of emptiness in their being—an indispensable emptiness that will allow them to recognize a completely different world and a completely different consciousness buried within them in a latent state.

Achieving the creation of this emptiness in oneself necessitates accepting the loss of name, form, individuality, desires, past, future, etc. during the whole time the aspirant is trying to meditate, until one day he comes to be filled with a strange and profound inner silence; an inner silence that was unknown to him up until that moment and within which he will begin to feel awaken within him, in the form of very subtle quiverings, the first manifestations of his Celestial Being.

As the seeker succeeds in deepening and prolonging the duration of his meditation, he will start to feel the beginning of the liberation and expansion of his consciousness. His consciousness will seem to expand infinitely and to become ever more luminous, fine, and ethereal. Furthermore, instead of feeling the dense and weighty matter of his corporeal form as he habitually does, he will experience the indescribable sensation of a very subtle and ineffable ethereal transparency of being.

An intense nostalgia will arise from the deepest part of himself, inciting him to want to give himself forever to this inhabitual state of being—which he will experience as a new birth that has just taken place within him; however, at the same time, he will realize the impossibility of such an accomplishment at this stage of his spiritual evolution, because he will still feel weighed down and held back by certain penchants and desires within his being that have not yet been transmuted.

One will have to take into consideration the fact that there are different degrees of illumination—depending on the level of being and consciousness of the seeker—and that, for the great majority of aspirants on the Path, illumination (if they achieve it) will not signify their liberation. They may even (because of certain old tendencies that are still alive within them) still be far from it. (…)

After what has just been said about the purpose of meditation, it is nevertheless necessary to be prepared to accept the fact that the practice of meditation cannot, in any way, be easy, especially for a beginner. The sustained concentration demanded during meditation—concentration which is of fundamental importance in any serious spiritual practice—may even prove to be laborious for some people. This is because the purpose of all spiritual concentration is to tear away and detach the aspirant from himself and from what he habitually is in order to constrain him to remain in the present—which is entirely contrary to what he is accustomed to doing.

Ordinarily (except for very brief moments of fleeting presence here and there), the mind of the human being is continually wandering uncontrolledly in the past or busy worrying (with justification or not) about the future—with all that the future may bring him by way of problems to solve the next day, or the next week, or the next year. Really exceptional conditions (such as bodily danger, terminal illnesses, accidents, natural disasters, etc.) are necessary to constrain him to remain in the present. Even then—this all depends on the type of person and his level of being—his presence, owing to his conditioning, may be very much partial and mixed with what his ordinary self unconsciously apprehends or does or does not want.

It is just this constraint to have to remain in the present during his meditation that takes the beginner by surprise and deters him. This is because, during the whole time he was growing up, he simply allowed his thoughts and emotions to flow passively where they would—just like the water of a river which flows in the direction that offers it least resistance, that is to say, downwards.

1  – Meditation – Part 1: The Experience of the Sublime

14 – The Fruits of Obedience

16 – Compassion and its Role in a Spiritual Practice

17 – Compassion and its Place in Sexual Relations

18 – Compassion in the Face of Ignorance and Blind Beliefs

19 – Concentration Exercises in the Movement of External Life

20 – Concentration Exercises to be Undertaken at Home

23 – Expansion of Consciousness and Other Dimensions