You are here: Home / Books / Fruits of Awakening 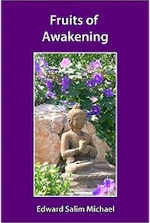 Did life appear by chance or as a response to a necessity in the Universe? What is the place of human beings in Creation? If they awaken to the mystery around them, their lives can become infinitely richer and fuller. Will those lives not take on an entirely different value if they realize that every moment that passes is unique and a farewell?

On all these questions, as well as many others, Edward Salim Michael shares the fruits of the path to awakening he followed during fifty years of intense meditation practice and full presence in active life.

Thanks to the powerful spiritual experiences with which his path was interspersed, the author sees the world from ordinarily inaccessible dimensions. He knows how to encourage seekers to want also to awaken to another state of being and consciousness to discover the Ineffable that they carry within themselves without knowing it.

Excerpt Chap 10 : From Little Farewells to the Great Farewell

Modern science ceaselessly inculcates in human beings the idea that they are merely the product of chance, that certain microscopic cells mysteriously came from nowhere and, purely accidentally, clustered together to create an extraordinarily complex organism, with a brain, organs of perception, locomotive functions, the capacity to reflect, think, speak, etc. and that, in the final analysis, human beings are composed only of an assembly of molecules and atoms that have, entirely fortuitously, found the way to attract each other to give humans life. Furthermore, no plan preceding this incredible Creation can be identified and no “architect” likely to be the initial cause of this prodigious manifestation can be perceived anywhere in the tangible world.

In fact, it is as though one were to declare that Gustav Mahler’s second symphony “The Resurrection” appeared entirely by chance on some music paper and that, when one analyzes it, one discovers it to be constituted of nothing but a collection of harmonies, rhythms, and notes that, through an inexplicable conjuncture, have come together in a certain order to form a mysterious musical work of extraordinary complexity and perfection, a work that it is possible to dissect phrase by phrase, down to the very first note that begins the symphony—the strange chance by which it has seen the light of day being unknown—and that is all! But, is this not to forget the mind of the person who created this work?

Perhaps life is not the simple product of an accidental event, as some apparently wish it to be; perhaps it already existed in a latent state in a non tangible dimension, beyond the grasp of humans in their current state of being and of consciousness, before finding itself projected into the space of the Cosmos by an Unfathomable Mind which, unbeknownst to all the beings peopling this planet, is experimenting in order to succeed in engendering, by way of this variety of vertiginous creations, a being endowed with a particular consciousness and intelligence, capable of a very high degree of reflection, with a specific purpose that eludes the understanding of humanity.

Someone who has known nothing other than the tangible aspect of life—to which alone he gives credit—will inevitably think that he is merely the result of the union of a spermatozoon and an egg, which met by pure chance, and that after around nine months of gestation, during which countless cells multiplied in a certain order to make him a body, he finally opened his eyes onto the phenomenal world in which he finds himself, by what strange and incomprehensible accident he knows not.

The idea of the human body—which is an astonishing instrument that no scientist could reproduce—must have first taken form in the mind of an Unfathomable Thinker before being made concrete in the tangible world. And, on an unimaginably vaster scale, it is the same for the creation of the whole Cosmos with its incommensurable space and the myriads of celestial stars that inhabit it.

Thus, it proves impossible for human beings to come to apprehend the true origin of this very troubling manifestation through the simple study of its various constituents and chemical components.

Technology may even bring them ingenious means allowing them to descend to the most elementary level of matter to discover the infinitesimal particles that constitute it, without, for all that, giving them a satisfactory answer to this disconcerting question.

In the same way, it would be absurd to try to understand where a pictorial masterpiece has come from only through analysis of its physical materials and the different colors used. The very first line traced on the canvas could be discovered without drawing any nearer the desired response. It would quite simply be to forget the great painter who was its author!

Because of all the extraordinary recent scientific discoveries about the Cosmos and Creation, the aspirant must take care not to find himself unknowingly trapped by certain influences that sow uncertainty within him, thus making him half-hearted in the way he approaches his quest and his meditation practice—doubts, conscious or unconscious, may even creep in about the goal he is trying to reach.

Through deep reflection, he needs to come to apprehend that every visible creation must have existed in a latent state first, before manifesting itself concretely in the tangible world. He will then find himself faced with a disconcerting enigma: in the Mind of what Enigmatic Thinker was it first buried?

1 – The Sense of Mystery

The Importance of Discrimination

The Enemies One Carries Within

The Power of the Past

The Relationship Between the Aspirant’s Interest and Her Attention

2 – The Enigma of Time and the Phenomenon of Repetition

How to Understand Reincarnation

The Future and its Influence on the Present

The Place the Seeker’s Quest Should Occupy in His Life

3 – The Power of Impressions and of Memory

The Influence of Impressions on the Psyche of Human Beings

5 – The Problem of Non-Acceptance

The Visceral Resistance of Human Beings to Impermanence

7 – The Tangible and its Grip  on Human Beings

Sentiment and its Importance in Art and in Spiritual Practice

The Mind of the Dead

The Creation of an Inner Silence

10 – From Little Farewells to the Great Farewell

Are Human Beings Merely the Product of Chance?

Do Human Beings Exist for the Divine Being?

The Necessity of Questioning Everything