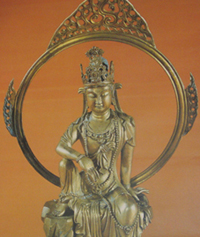 Human beings have within them the potential for inner evolution, only through which will they be able to find the happiness and fulfillment for which they have been seeking externally in vain.

Consciously or unconsciously, we live in constant dissatisfaction. Pleasures are short-lived; people and things imperfect. Our fragile body, which needs to be nourished and protected, is subject to illness, ageing and death. We are constantly lost in a mental world filled with immediate preoccupations with which to deal, and life passes by in this way until the day death raises its head to face us, without our understanding the meaning of our time spent on this Earth, nor what awaits us after the disintegration of our physical body.

However, human beings have within them the potentialities which would enable them to find both the answers to the mystery of the world and the ultimate satisfaction they have been seeking in vain.

In the Silence of the Unfathomable – Chapter 1

Apart from the form of consciousness in which human beings spend their life and which, in their ignorance, they assume to be the only one conceivable, there exists an entire range of different levels of consciousness rising up to the Supreme, in other words, Divine Consciousness, an Unconditioned Consciousness of the purest kind, which is actually their true nature, their Buddha-Nature—that they must come to recognize and in which they need to learn how to maintain themself, to be able to face death in the way they should on the day they will be called to leave this world.

Through a serious practice of meditation, it is possible for them to attain this Pure Luminous Consciousness on which rest their hope of liberation, and thanks to which they may begin to see with sufficient clarity the tragedy of the mental labyrinth in which they find themselves trapped—a labyrinth that, unbeknownst to them, they, themselves have built with their undisciplined thoughts which swirl around unceasingly in their mind, with no definite goal. /…/

In order for the aspirants to have a better understanding of what is being asked of them in a field which is out of the ordinary, it is important for them to comprehend that the evolution of consciousness in human beings, as we usually know it, is merely the result of an automatic process which Great Nature has set to work without conscious participation on their part, and which turns out to be extremely limited because the level of consciousness human beings normally have comprises only of what is strictly necessary to ensure their physical survival.
However, it is possible for them to overcome these limits and attain a state of consciousness beyond that of the temporal. Nevertheless, this evolution—which actually is inner evolution, vastly differing from what is generally supposed—requires conscious and continual efforts on their part.

Obstacles to Enlightenment and Liberation – Chapter 4

The aim of any practice of concentration and meditation is to free the aspirants from their usual way of thinking, feeling and being, so that they manage to become aware of themselves in a manner which is totally different from the way they are normally.

This self-awareness, inaccessible to the seekers in their ordinary state of being, is closely linked with a very special inner presence which is liberating, transforming and therapeutic at the same time.