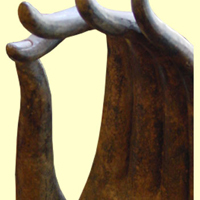 Staying motionless for some time during the day is necessary to detach oneself from the impressions which constantly assail us from the outside world, in order to remain empty and available internally in a continual now. This requires the seeker’s continual attention and renunciation of the thoughts which will keep on appearing and conflicting with his desire to remain concentrated.

Any meditation practice essentially has the purpose of accomplishing the tearing away of the aspirant from himself—tearing him away from his ordinary individuality, as well as the habitual feeling that he has of himself, crystallized in him since a time far in the past and which, because of long conditioning, he believes to be his only identity—in order to discover, within his being, the other aspect of his double nature which habitually remains hidden from him because his interest and his attention are continually directed only towards the outside world.

Behind the thick screen of his corporeal form, behind his ordinary individuality, and behind his little world and everything he considers to be himself, there is, within the human being, another Universe of an extreme delicacy and an extreme ethereal transparency, an inner Universe ineffable and luminous, which is his True Nature, his Divine Nature.

In the Silence of the Unfathomable – Chapter 7

The primary objective of meditation is to teach seekers to be and live in the present; only in this way can they hope to find in themselves the strength they require to be able to achieve the desired Supreme Goal—Liberation. Therefore, it is of the greatest importance for them to understand, from the beginning of their quest, that being in the present is closely linked with self-consciousness. This is the key which opens the door to real spiritual practice.

Over the course of many attempts to remain attentive and present to herself during her meditation sessions, she will remark, with consternation, that after barely a few minutes (or even a few seconds) she is carried away by parasitical thoughts or images that turn over incessantly in her mind and she will find herself once again immersed in this inexplicable and troubling absence to herself, within which she sleeps, so to speak, often for a long time before realizing what has happened to her.

It is only when she is recalled to herself by a sudden recovery of consciousness that she realizes she was once again submerged in this foggy state of dreaming and strange inner absence and, noticing the difficulty she experiences in avoiding sinking into this state, she will begin to understand the true sense of the Awakening spoken of by the Buddha.

In the Silence of the Unfathomable – Chapter 5

One commonly hears it said that all one has to do is observe what is going on in the mind to be freed from it. However, if the seeker tries to follow the working of his rebellious mind from its customary state of consciousness (which, without his usually realizing it is a state of passive consciousness), then, before he realizes what has happened to him, he will find himself taken hostage and enshackled by these very thoughts which are tormenting him. …/
The seeker must succeed in making the crucial effort to stay concentrated, not under duress (as one risks doing at the beginning), but out of a true desire to do it; in other words, he must reach a point where the effort of holding his concentration becomes a real pleasure—as is the case with some rare great painters and composers of music. He must realize that, in this field, any results obtained under duress can only eventually be unsatisfactory or even frustrating, and can, in certain cases, upset him to the point of his perhaps not wanting to meditate anymore.
If, during his meditation sessions, the aspirant succeeds in his concentration becoming truly sustained and unfluctuating for a sufficiently long period, he will then feel overcome by a strange and subtle joy which will flood his being and dazzle him; a joy which is not of this world accompanied by a tranquil bliss, which will help and assist him in all his future efforts to remain concentrated, whatever the spiritual practice to which he is devoting himself.

The beginner must know that it is indispensable for him to meditate every day, with inalterable regularity, if he wants to succeed in subduing his rebellious mind and reaching the Superior Aspect of his double nature—his Celestial Aspect. At the beginning, he may even believe himself fully motivated and ready to give himself to his spiritual practice. He may even think he is really persuaded and very determined to dedicate himself to it, but, despite this conviction, upon which he thinks he can rely, it is as though there were within him somebody hidden, another self, who furtively says to him, “Yes, but not straight away!”