You are here: Home / Books / Obstacles to Enlightenment and Liberation

Obstacles to Enlightenment and Liberation 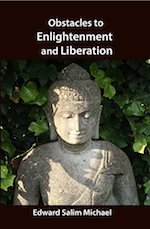 What are the obstacles to enlightenment and liberation? What prevents us from coming into direct contact with our true selves?

It is not enough to want it; practices, exercises, concrete tools are necessary to reveal the automatisms that condition us and to detect alienating thought patterns. The author guides us with precision through the traps that will inevitably be encountered on the path. Thus, inner chatter, that little voice within us that never stops, that comments and repeats to the point of obsession, must be recognized, one must distance oneself from it, and use skillful means to stop it.

Identifying the obstacles and approaching them with understanding gives seekers the possibility of knowing another state of being and consciousness, from which it is possible for them to apprehend the meaning of life and death in a completely different way; it is a decisive step on the path of their liberation.

Self-study will reveal to a serious seeker that among the various manifestations of his inferior nature, it is repetitive thoughts and, according to his type and temperament, the kind of inner chatter that accompanies these thoughts most of the time, that constitutes the major obstacle on his route towards his Princely Self, thereby preventing him from discovering within himself another form of existence free of time and space.

If the aspirant is really sincere in his desire to know the obstacles that screen the light of his Celestial Identity within him, he needs to find a particular attitude that allows him to accept seeing this curious inner chatter that takes place within him during most of his day, even when he believes himself to be fully occupied with his daily activities.

The problem with succeeding in detaching oneself from this inner chatter lies in the fact that, firstly, one is generally so identified with it that it proves difficult to be able to see it in a tangible way and, secondly, there exists a strange phenomenon in human beings, which is that they feel lost without these inner preoccupations. They react as though their lives were going to be empty without this incessant activity within them. Given that they live in ignorance of the other aspect of their double nature, they are irresistibly driven to lose themselves in feverish activities (inwardly and outwardly), which they depend upon to give them the feeling and the assurance that they exist. They are afraid of letting go of anything at all within themselves for fear of no longer being able to recognize themselves.

If one says to someone to let go of what he is inwardly ruminating upon, he might respond: “I cannot.” Should he not say instead: “I do not want to do so.”? Such “letting go” will inevitably create within him a void, which is the means allowing him to begin living outside time. However, if he finds himself suddenly confronted with the sentiment brought about by the fact of “living outside time”(a sensation that temporarily effaces his habitual state of being and his ordinary way of knowing himself), he feels lost, even afraid.

As long as a seeker does not yet know within himself the “center of gravity” that he must turn towards to give meaning to his life and to be able to stop the disordered manifestations of his mind, he will inevitably remain weak. As he will not be able to succeed in being, so to speak, “gathered” within himself, his energies will, despite himself, be scattered in all directions.

Once inner chatter has begun and the aspirant has given it credit and identified with it, if he tries to detach himself from it in order to put an end to it, something within him will obstinately refuse, insisting on first finishing what he is occupied in recounting to himself before consenting to let go. However, this uncontrolled process taking place within him will not stop at this stage. Indeed, unless he is wise enough to apprehend the long-term damage this involuntary discourse can cause within his being and try to put an end to it without any further delay, he will want to begin his monologue again in order to add an extra detail to what he initially wanted to say, something he thinks he has forgotten … and this will continue interminably.

By examining himself attentively, perhaps he will discover that most of this inner chatter (which is frequently associated with all sorts of imaginings) proves not only chimerical, aimless, and futile, but is also very often an attempt at justification designed to soothe a feeling of conscious or unconscious guilt resulting from a thoughtless action or word—a justification that may bear no relation to reality or the original situation.

Perhaps the seeker does not realize, at the beginning, what such a spiritual adventure involves by way of work and tenacious self-study, which are necessary to allow him to advance steadfastly in this difficult inner journey towards the Celestial Aspect of his double nature. So as to be able to free himself of these harmful obstacles that he encounters within him, he needs, at the beginning, to have some supports that he can lean on and, among these various supports, he can use the Nada (that particular sound that is audible inside the ears and the head, to which reference has previously been made) to shield himself from these undesirable voices within him.

Through in-depth self-study, the aspirant will come to see not only the futility of this inner chatter, but also its often negative character. Indeed, when he finds himself in the situation in or the presence of the person he imagined when these inner commentaries were taking place within him, he will discover, too late, that the action or the discourse he had prepared no longer corresponds to the reality of the moment and would even cause him problems subsequently if he persisted in wanting to implement it.

If this inner chatter is about negative subjects, it may, if someone yields to it continually, become a self-destructive obsession (such as may be seen quite often in old people) and a source of suffering for him as well as for those who share his life or who work with him and who, in an ordinarily mysterious and incomprehensible way, are affected by the most intense thoughts and feelings he may secretly carry within him at a given moment.

Edward Salim Michael gave specific exercises to control the inner chatter of the mind in the following works: The Law of Attention, Inner Awakening and Practice of Nada Yoga, The Supreme Quest, Obstacles to Enlightenment and Liberation.

Introduction  – The Trap of the Intellect

How to look at problems within oneself

The irrational aspect of the mind

2 –  The Aspirant and Existential Life

The aspirant faced with duality

4 – The Aspirant: A Battleground Despite Herself

Criticism and control of the mind

5 – Gravity and Truth of Being

The creation of a continual now

The unification of the three aspects of human nature

7 – Pitfalls on a Spiritual Path

Liberating oneself from the prison of space and time

8 –  The Profane Self and the Sacred

The fascination of the visible

9 – Awakening: Return to Oneself, Return to the Infinite

The beginnings of Awakening

The difficulty of conserving this particular state of Awakening

Energy in Creation and the force of gravity

Physical sleep or absence to oneself?

10 – Concentration Exercises to be Performed Outdoors

11 – Concentration Exercises to be Performed at Home

12 – Death and the Meaning of Meditation

The meaning of earthly life

As one lives, so shall one die …

Abandoning oneself at the hour of death