You are here: Home / Books / In the Silence of the Unfathomable

In the Silence of the Unfathomable 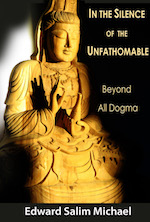 “It is very difficult for a beginner to understand that the goal to which he aspires is closer to him than the blood in his own veins; it is, in truth, within him and in the present. It is enough for him to consecrate himself with extreme sincerity to his spiritual practices to join with the Sublime within him; nevertheless, even if he has succeeded in reaching It, that does not mean that he will subsequently be able to remain united with It.”

In this last work, Edward Salim Michael exhorts us with infinite compassion to consecrate ourselves to the only thing that counts and that can give meaning to life: a spiritual approach that is beyond all dogma.

This approach is one of knowing and experiencing the value and importance of a conscious return to oneself in the present.

Holding this state of return to oneself continually is truly the key to Awakening.

This return to oneself is, at the same time, a return to the Absolute within oneself ; it is the greatest of all mysteries, to be understood and grasped through experience.

To do so, aspirants must identify the different levels of consciousness they must learn to nurture within them. They must see within themselves the obstacles to liberation with which the path is strewn, particularly inner passivity, and understand how to overcome tenacious thoughts.

Every word of this book is an encouragement and an incitation to make the necessary efforts to awaken.

It guides us along the path that Edward Salim Michael followed himself to find and permanently remain in the Silence of the Unfathomable, the source of all real and lasting felicity.

It is necessary here to approach an extremely delicate question; it is the question of karma and the notion that one generally has of this word, as the term is most often used thoughtlessly to, in some way, justify the suffering and injustice that afflict so many people.

The doctrine of karma comes from India and predates Buddhism; it permeates all of Hindu philosophy. It is an impersonal law of causality, which bears no relation to any kind of moral retribution, the complexity of which the Buddha perceived at the moment of his Awakening.[1]

Everywhere in the world, human beings have always sought to know the reason for the injustices and suffering that they are subject to and that they see all around them. The West has responded to this troubling question by attributing them to the will of God, a will that remains incomprehensible to human beings, but one they must accept. As for mystical India, it recognized the law of the chain of cause and effect, an infinite chain, too impersonal to be able to satisfy the popular thirst for justice; thus, the original doctrine has been deformed into a notion of fault and merit. It is precisely this idea that, currently, is commonly disseminated in the West, with its dangerous corollary of condemnation and harshness toward others.

Although it is true, as explained several times in this book, that all human beings are and can only be the result of what they have made of themselves in a recent or distant past (that is to say, the way they have acted and what their principal interests in life have been) and that they sometimes find themselves placed in situations that seem excessively hard to them, but that, without them perhaps realizing it, they have attracted by the way they vibrate within themselves, which does not for all that mean that everything that happens to them by way of dramas or difficulties is the consequence of bad actions committed in the past. Indeed, it must not be forgotten that all human beings, from childhood (when they are still very vulnerable), are subject to the conditioning of those around them and of their era, as well as the destiny of the country into which they are born—a destiny that is sometimes terrible, as seen in Rwanda, Bosnia, Cambodia, Tibet, or during the Second World War—and without them having any “karmic fault” to atone for.

There are certainly causes for all these dramas, and these causes have produced effects (which is the strict definition of the law of karma proclaimed by the Buddha, namely: “There is no effect without cause”), but the cause is not necessarily imputable to the person who is subject to the effect. It is this constant confusion between the cause of suffering and the responsibility of the person undergoing it which causes the word “karma” to be thoughtlessly thrown in the faces of unfortunates in a way that can only be called intolerable—as is the case for untouchables in India.

These poor people are constantly treated with contempt, as popular Hindu belief attributes the fact of being born an untouchable to faults committed in other existences.

Thus it is, for example that, when a Brahman needs to have his damaged sandals repaired, as handling leather—the skin of a dead animal[2]—would be to taint himself, he calls upon an untouchable. He remains a certain distance from the untouchable, in order not to be tainted by him, and throws him the shoes which are humbly picked up by the cobbler who makes haste to repair them. Once the work is done, it would be disrespectful on the cobbler’s part to throw the sandals to their owner, so he sets them on the ground, then withdraws far enough for the Brahman to be able to collect them; the Brahman leaves a derisory sum of money on the ground, which is, according to him, all that the man deserves—given his bad karma, the cause of his birth as an outcaste—and with which the poor wretch has to feed his family who live in dreadful poverty.

Does this Brahman ever ask himself what might that unfortunate feel when he is constantly treated with such contempt? Does he dream for a moment of the terrible mental prison in which that pariah is locked, a mental prison which is worse than a physical prison—from which it is sometimes possible to escape.

In fact, without generally being conscious of it, someone unenlightened is always imprisoning, in one way or another, the people with whom she comes into contact in the impression she forms of them, which she can no longer let go of, because she is not capable of being sufficiently present and inwardly free to be able to see them always in a new way. In doing so, in a very particular way, she imprisons herself too in the prison she puts others into.

[1] Incidentally, when one of his disciples told him he had understood it, the Buddha responded with these words: “The law of karma can only be truly perceived by a Buddha.”

[2] Yet, paradoxically, he does not consider himself tainted by wearing leather on his feet.

3 – Center of Gravity and Obedience

5 – The Problem of Tenacious Thoughts that Harass the Aspirant

7 – Remembering Impermanence as a Spiritual Practice

13 – The Aspirant and the Mystery of Phenomenal Existence

14 – The Major Obstacle to Liberation

15 – Causes and Conditions of Recurrence

By Way of a Conclusion: The Author to His Readers