You are here: Home / Books / Inner Awakening and Practice of Nada Yoga 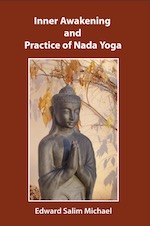 How much choice do I have in my life? What is liberation? How can one experience enlightenment?

Onto all these questions and many others, Edward Salim Michael shines the light of a master who, with infinite compassion, guides aspirants on the path he, himself, traveled, a path that permitted him to attain the highest realizations and whose obstacles and traps he knows.

To experience enlightenment, first one must emerge from the “diurnal sleep” in which human beings are ordinarily plunged, unaware of the divine origin of their nature; a situation that makes of them “tragically incomplete beings.”

Step by step, in his own words, accessible to all, the author explains the conditions that allow human beings to reunite with themselves.

An astonishing force emanates from this work, which speaks to intuition as well as to feeling, a force that comes from an entirely out-of-the-ordinary sincerity. A book that one will, without doubt, come back to many times throughout one’s life.

Every aspirant who sets out on a spiritual path must remain ceaselessly on his guard so as to face a particular danger that lies in wait for him at every step and may cause him to fail practically from the beginning of his adventure in an invisible country whose laws belong to a Universe that he cannot hope to understand with the state of mind from which he undertakes this journey.

He must keep watch and remain extremely vigilant if he does not want to lose his way and if he sincerely desires to know himself and know the Reality behind all visible phenomena, whether they concern living beings or apparently inert objects.

He must, to begin with, accept the fact that there is in every man and every woman—almost without exception—from their most tender infancy, a tendency to a certain passivity of mind, a sort of particular inertia that remains hidden from them because of its subtlety and that, deep down, hardly differs from that of an animal. Nor can the seeker—despite a certain degree of enthusiasm that he may feel at the beginning of his spiritual journey—escape this problem.

If that were possible for them, human beings would only want to drift along and tranquilly enjoy all the pleasures that the manifest world offers them, without doing anything else. Thus, they would do nothing but remain in a state of perpetual inertia which could only result in the destruction of their being and the definitive arrest of their evolution. (…)

A beginner on the path must understand that just because, driven by his spiritual aspirations, he feels at a given moment a certain enthusiasm, that does not mean that he will be free from confronting this fundamental problem. Passivity lies in wait for him at every moment, just like a spider eagerly awaiting its prey. Like anyone else, the aspirant also carries within his being the seed of this tendency that interferes in all that he does in external life. Without being conscious of it, most of the time he seeks only ease—even when he sets himself to a spiritual practice.

This subtle passivity of mind is generally not evident to the seeker because, when he finds himself in its grip, he identifies with it in a singular way and is, so to speak, transformed into this state. If he is not guided by someone who knows this problem well, it is very difficult for him to detach himself from it enough to be able to see its effect on his being. (…)

The necessity of an inner questioning

He must learn to carry within him, throughout the whole day, a particular state of questioning. It is a silent and vivid state of questioning, not formulated in words, that, insofar as possible, will help him to create within himself the beginning of an awakening—which is indispensable if he wants to begin to know himself and know the state of passivity in which he lives ordinarily.

This specific state of awakening that he experiences at certain moments, after having made the necessary effort to evoke it within himself, is extremely fragile and difficult to maintain. Hardly has the seeker felt its presence than, the next instant, he loses it and once again becomes imprisoned in his habitual condition of absence and passivity of mind. (…)

Unless someone succeeds in kindling in the aspirant a fervent desire to extricate himself from the particular torpor in which he is immersed—which, without him realizing it, constitutes a major obstacle on this route—and unless someone takes him by the hand to guide him on this path that is so inhabitual and unknown (a narrow, hazardous path that he cannot discover by his own means), he will never come to see that, while pursuing his various spiritual practices, he must continually engender burning questions within himself in order to liberate certain energies in his being that can stimulate his efforts and keep them alive.

He must ask himself the kinds of questions that, ordinarily, cannot arise within him without his participation—interrogations so profoundly troubling that they drive him to be intensely inwardly awakened and absorbed.

– “What state will I be in after death, if, however, when speaking of a state, I do not allow myself to refer to anything known in the phenomenal world?”
– “From what mysterious and unfathomable Source does my life draw its origin?”
– “What is this force, incomprehensible to my limited mind, that is animating my life?”
– “What is life really and what is it trying, so enigmatically, to accomplish in this immense Universe?”
– “Through what mystery do the different organs of my body, each of which has its own life, work?
– “Does space have a beginning and an end or is it truly entirely limitless?”
– “How can I explain the existence of these billions of galaxies and stars that inhabit such an inconceivably gigantic Universe and are separated from one another by vertiginous distances as well as that of the deep, eternal darkness that surrounds them?”
– “What is the true nature of this strange darkness which, in comparison to the minuscule luminous dots that are the stars, occupies such a large part of the Cosmos?”
– “Just like the countless cells of my body, which are born and die at every moment without knowing that they exist within me, are the celestial stars also living cells in the incommensurable body of the Cosmic Being? And, on a scale that is beyond me, are they too constantly being born and dying without knowing that they exist within It?”
– “I am so infinitely small in this vast Universe that I seem to disappear in the immensity of its space and be totally invisible; do I really exist or is it only a dream?”

All these questions and many others must remain suspended in the seeker’s mind and he must deny himself any commentary about them. They must constantly accompany him so as to make him intensely awakened and vigilant, for fear of gravity regaining strength within him and once more pulling him down, into his habitual state of mental passivity.

An aspirant on the path must, like a great scientist, become a “Seeker” in the true sense of the word if he wishes to accede to a very particular state of being that will one day allow him to break down the walls of the prison that his profane self has locked him in and to advance towards the vast stretches of Light of his Celestial Being.