You are here: Home / Books / From the Depths of the Mists

From the Depths of the Mists 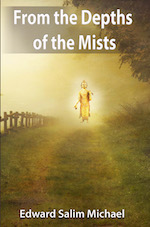 The atmosphere, both mysterious and profoundly spiritual, of the mystical tales Edward Salim Michael offers us removes readers from the ordinary world and  makes them receptive to the profound truths expressed in the commentaries.

The value of these timeless tales, with their tinge of wholly Eastern poetry, essentially comes from them having been brought to life by the pen of a spiritual master, with the aim of awakening readers to the urgency of consecrating their lives to the discovery of the infinite treasure they harbor in the depths of their being.

The lectures that make up the second part of this book trace the essential outlines of Edward Salim Michael’s teaching, a teaching beyond all dogma, addressed to all seekers, whatever path they may be following.

In our time, people are tragically conditioned to accord reality only to the tangible, to what they can see and touch, or what can be demonstrated to them “scientifically,” ignoring a whole swathe of reality that can only be apprehended inwardly.

Despite the faculty of a certain degree of reflection with which they are endowed, because they are blinded by the tangible, human beings cannot help wanting to apprehend everything, including the Universe and the mystery of Creation, by evaluating them in terms of “quantities.” The quality of what they observe apparently does not interest them at all or not very much, as it is possible for them to see and measure the “quantities” of matter that objects are composed of, but, because the “quality” of these objects (which is more important by far) is inaccessible to their sensory organs, they accord it but little value or none at all.

This is the reason that the depth of a sentiment, the beauty of a work of art, the elevation of a mystical experience, which constitute so many experiences impossible to measure through “quantity,” most often remain out of reach of the mass of humanity, whose interest is turned only towards the tangible.

Human beings cannot deny the fact that their incapacity to perceive with their sensory organs the thoughts and the feelings of another does not render these any the less real. In the same way, the fact of non-spatiotemporal dimensions being, by their nature, invisible does not mean human beings can allow themselves to deny their existence.

Furthermore, is Time not a dimension, which, although invisible, is nevertheless real?

Human beings cannot help being creatures of habit. They have been made familiar with a certain form of existence to which they have become attached and, consequently, any knowledge located beyond time and space that they might mysteriously receive from another world within themselves, but that endangers their belief in the visible, which they consider to be the only possible reality, frightens them; the relativity of the reality of the tangible eludes them.

The visible has acquired such reality for them that unless destiny puts them in contact with a teaching that can tear them sufficiently away from themselves and their habitual manner of conceiving existence, they will remain a prisoner of what their minds construct from incomplete or even incorrect information transmitted by their sensory organs. It is only through specific spiritual work that they will be able to succeed in sensing that what they had hitherto considered as an absolute reality is only relative and partial (as it changes according to conditions and the different viewpoints from which one observes it) and that there exists, behind the visible, another reality entirely that words and sensory organs cannot reveal to them. They need, by way of intense meditation practice, to succeed in discovering it by experiencing it through a direct inner insight.

Any spiritual understanding, any truth inwardly realized belongs only to the person who has experienced it, and that person can only try, inadequately, to share his experience with others; however, for those others to be truly able to have that experience they will have to follow the same path, that is to say, make identical spiritual efforts.

It is impossible for our contemporaries, conditioned by the omnipotence of a materialist science, to understand that these inner truths cannot be apprehended intellectually or demonstrated tangibly; thus, they will remain inaccessible to people as long as they remain as they habitually are, because those truths require a level of being and a quality of consciousness that are entirely different from those one usually knows. It is only by way of an inner perception that one can hope to succeed in discovering the Ultimate Reality.

1 – Gimpou and the Statue of the Goddess of Compassion

4 – Hakashih and the Portrait of the Buddha Amitabha

6 – The Tale of Bhugur Who Would Not Abandon His Dog

7 – Kawandjeer and the Temple Lamp

11 – Mysterious Incursion into Another Dimension

The Problem of Sexuality on a Spiritual Path

Death and the Deep Meaning of Meditation

The Essence of a Spiritual Practice