You are here: Home / Interviews

The Nada, the inner sound  on  the Spiritual Awakening Radio

2 – Excerpts of the Part two of the program on the Inner Sound – January 2011 – James Bean reads texts about the inner sound from different traditions: 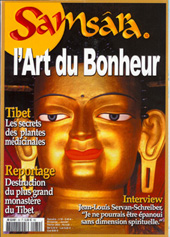 There is specific work to abandon the attachment that one has with the tangible and the world of senses which has to be done whilst one is still in a body, as well as abandonment of the customary individuality which people falsely believe to be themselves.

S: Exactly, what has differentiated Buddhism from Hinduism is the Buddha’s insistence on the fact that there is nothing permanent which one may call oneself.
E-S.M. A clear distinction has to be made between the ordinary self (which Christianity calls the old man) and the Self, which Hinduism also terms Atman (and which is equally called soul or spirit in current Christian terminology).
The Buddha has to be put back into the Indian context of his era. One has the tendency to forget that he was Indian and therefore that his teaching was nurtured by the cultural context of Hinduism.
He rejected the concept of “jiva,” i.e., the fact that a man, who has come to the end of his life, remaining what he is, simply casts off his worn out body to find a new one in an endless series of existences. He stressed the fact that the human being is changeable from one instant to another and that his customary individuality, resulting both from the influences of his environment and the manner in which he has lived, cannot survive as such after death—a concept which is the wish of many people and commonly encountered in India and even in the West.
On the other hand, however, the identity of the Atman and Brahman, i.e., the identity between the higher nature of the human being and the Supreme Divinity is something which was evident in the Hindu cultural context and was recognized by the Buddha in the sutra, “There is, monks, an unborn, unbecome, unmade, unconditioned. If, monks, there were no unborn, unbecome, unmade, unconditioned, no escape would be discerned from what is born, become, made, conditioned. But because there is an unborn, unbecome, unmade, unconditioned, therefore an escape is discerned from what is born, become, made, conditioned.” (Udhâna, VIII).
One finds this knowledge present in Christianity when it is said that man was made in God’s image, and that his soul is immortal. It should be understood here that this is the impersonal side of one’s being and not, as people naïvely believe, their ordinary self or ego.
It is this ignorance of that aspect of their being which is the source of all the suffering which afflicts human beings; this is why the Buddha said, “Abandoning this taint, be taintless, O Bhikkhus !”

• The Role of Great Music  in Existence