You are here: Home / Quebec 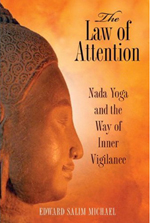 I met Salim Michael last May at the Shawinigan Symposium. It was a complete surprise for me to feel suddenly I was in the presence of a master.
But what is a master you ask me ? The people I call “master” are, for me, those who have understood the mystery of human consciousness and who have overcome the narrow limitations of “personality;” personality simply being a series of historical events which give us a name, a history, etc., but which have nothing to do with our essential nature. Mystics often describe the state of enlightenment as a vast ocean of cosmic consciousness, infinite, where there is neither subject nor object, but where the observed, the observer and observation meld into one.
So, the master is the one who, because he has achieved the realization of his being, can guide those who are ready to make the attempt. The master’s position is not one of superiority but of a guide.
Essentially, the master is a mirror for his disciple, reflecting the clearest possible image of him (or her) self, so that he can free himself from whatever is blocking his consciousness and finally discover “the face he had before his birth.”
Salim Michael is an Anglo-Indian of British nationality, currently living in France with some of his students. From what I gathered at his lecture, he lived for several years in India where he sought in vain a master who could guide him, teaching himself over the course of his research certain little-known forms of yoga.
I came out of the Symposium astonished at how things had gone and feeling as if I was in no-man’s land. But I had his book; it was curiously written with sentences which are a paragraph long and eccentric turns of phrase such as I had never read in French. As Salim Michael says in his presentation, he has neither scholastic education (he only learned to read and write at the age of nineteen), nor a true mother tongue (his parents were constantly moving country during his childhood); he is a simple man and he only wrote this book at the request of his students.
“The aim of this book,” as he wrote in the preface, “is to assist the seeker in understanding his Higher Nature and state after death, by a direct inner experience, the state whence he came and to which he shall return on leaving this form of existence. The special value of this book – if it has one – is that it is not based on accumulated intellectual knowledge but only on personal experiences gained through long years of bitter and solitary work.”
Over the succeeding months, I read his book in small parts, stopping at each chapter, sometimes trying a few of the suggested exercises, because The Way of Inner Vigilance is virtually a meditation manual, which at times describes in great detail the techniques presented. It is far from being a book of “techniques,” as these only take up a tiny proportion of the tome, but I have the impression that Salim Michael planned his book so that it would gradually lead its readers onto the “way.”
Also, I cannot help thinking that The Way of Inner Vigilance almost physically resembles its author: intense, sincere, a little stern and bearing the marks of persistent effort. Furthermore, throughout the book, the author goes back over the difficulties of the process and the price there is to be paid for embarking on it.
Unlike other masters, Salim Michael does not make you laugh a lot in his book: all his comments have one sole objective: to make the sleeping consciousness vigilant. However, the stern side of Salim Michael is counterbalanced by the simplicity and almost childlike purity of his discourse: in this book, there is a grace and elegance which derive from the natural, virtually raw side of expression.
Contrary to many other books, this one has been written with the intention of providing followers with a work tool. Nowadays, and more so than ever before because of the tape recorder, the words of masters are directly transcribed in their oral form, then edited or compiled by disciples. Often, they do not have the cohesion and order that we find in The Way of Inner Vigilance. In this regard, as with the almost systematic character of his book, I am sure that Salim Michael makes a valuable and perhaps unprecedented contribution to the experience of human consciousness.

Endorsements
Preface by Ajahn Sumedho
Foreword.
Note from the author
Introduction –
A reflection –
1 – Birth and self-forgetfulness
2 – The attention and its importance.
3 – The body and self-recollectedness
4 – The aspirant’s attitude when alone
5 – The slavery of wrong personal consideration
6 – Inner work in outer life conditions
7 – Sva-Vani-Sravana-Yoga, Yoga of listening to the sound of one’s voice
8 – Efforts and sincerity
9 – The mysterious role of suffering
10 – Nada-Yoga, Yoga of the inner Sound (part one)
11 – Nada-Yoga, Yoga of the inner Sound (part two)
12 – Nada-Yoga, Yoga of the inner Sound (part three)
13 – Nada-Yoga, Yoga of the inner Sound (part four)
14 – Nada-Yoga, Yoga of the inner Sound (part five)
15 – The practice of concentration while walking outside
16 – Hidden tendencies and the meaning of renunciation
17 – Tapas (self-denials) and their true significance
18 – Earthly existence as indispensable means for transformation
19 – Yoga of the void
20 – Problems in meditation and their equivalent when dying
21 – Hatha-Yoga (part one)
22 – Hatha-Yoga (part two)
23 – Hatha-Yoga (part three)
24 – Time and Eternity
25 – Meditation and the after-death state.
26 – The importance of cyclic recurrence in the Universe
27 – Meditation with slow walking and breathing (part one)
28 – Meditation with slow walking and breathing (part two)
29 – Meditation with slow walking and breathing (part thrce)
30 – Meditation with slow walking and breathing (part four)
31 – The interaction of forces in the Universe and life
32 – The power of hidden influences emanating from beings and things
33 – Actions and their consequences in the world
34 – The trace that thoughts, words and deeds leave
35 – The human being thinks himself into what he is
36 – Accidental forces and their effect on a person’s being
37 – Seeing and hearing
38 – Exercise with the sacred syllable OM
39 – Sadhana and Enlightenment (part one)
40 – Sadhana and Enlightenment (part two)
41 – Sadhana and Enlightenment (part three)
42 – The further understanding of right effort
43 – The price of Enlightenment
44 – Mother and child
45 – Man and woman
46 – Food and the human being
47 – The Spectator and the spectacle
48 – Conclusion and summary (with some final advice and reminders)
Postface
Index
About the author.

27 – Meditation with Slow Walking and Breathing (Part One)
It is not enough to have known higher states of consciousness during meditation only when sitting still. It is necessary to try to maintain this state of self-recollectedness… next